On May 19th, 2020 the city of Lynchburg, Virginia held City Council elections. These elections were for the 4 non at-large seats on the City Council. This article will look at the wards themselves, the candidates, and then look at the results and try to draw some conclusions about the direction of both the Lynchburg Republican and Democratic parties. 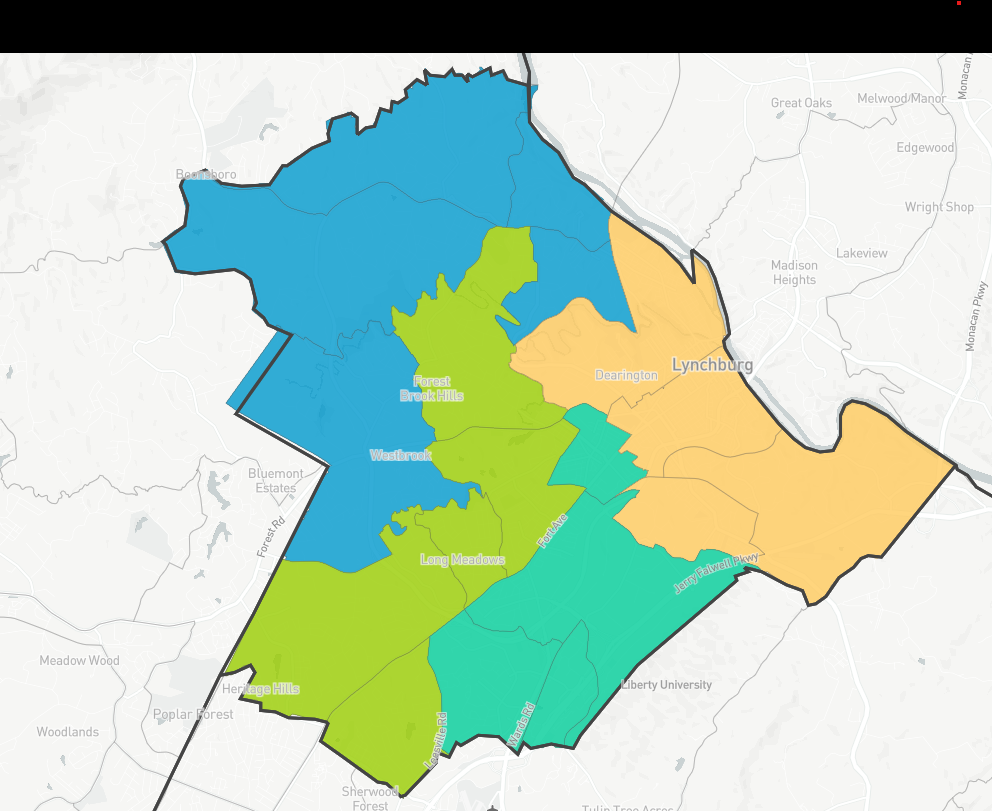 The city of Lynchburg is an Independent City nestled in the Blue Ridge Mountains of Virginia. It has a population of about 80,000 and the major employers are Liberty University, Centra Hospital, BWXT, and Schewels. The City is divided into 4 wards that are shown above.

The first ward of the city of Lynchburg is the growing part of the city. It staples old-town Lynchburg with the growing suburbs near the Bedford county border. This is also a very split area of the city. Riverside contains Randolph University, a liberal arts college of 800 students along with Boonsboro, which is the old money, conservative part of town. This leads to the ward having very disparate wants and needs that tend to become proxy battles during election season. The incumbent prior to the election was Vice Mayor Mary Jane Dolan.

The second ward of Lynchburg is downtown. This is the poor part of Lynchburg, but it also the gentrifying part of the city with abandoned factories being turned into new lofts every year. The area is predominantly African American and it votes generally in favor of liberals. The incumbent prior to the election was Sterling Wilder.

The third ward of the city of Lynchburg is the Wards road corridor. This is the area that was annexed by the city in the 1970s and is home to Liberty University. The constituency is Liberty students and the small residential communities off of wards ferry road. This area will always vote Republican, and it includes one of the worst precincts for Democrats in the state. The incumbent prior to the election was Jeff Helgeson.

The fourth ward of the city of Lynchburg is the leftovers ward. The ward is the suburban part of the city. It is fast-growing containing the Timberlake area and the Wyndhurst area. This is where all of the liberty grads that stay in Lynchburg live. The district also contains my alma mater the University of Lynchburg. The incumbent prior to the election was Turner Perrow

The current council is a 5-2 liberal majority. All three at large members of the council (Randy Nelson, Beau Wright, and Treney Tweedy) were liberals. Nelson could also be considered moderate because he is an old school Blue Dog, while Dolan and Wilder are more liberal. Helgeson and Perrow make up the conservative wing of the council. Helgeson is the only member of the council that is explicitly a member of a political party; he is a Republican.

The one thing that you cannot avoid in the city of Lynchburg is the shadow that Liberty puts over everything. Liberty is one of the largest colleges in the country and they employ over 10% of the city themselves. They own River Ridge Mall and numerous other buildings and throughout the city. Liberty has kept the city alive during the bad years with its growth, but much of the land that they own is tax-exempt. Therefore, large amounts of the city are tax exempt.

The major fault line is how to make Liberty pay a fair share. This leads to numerous issues on meals taxes, bus service, etc. The other major issue is keeping police officers. BWXT is a Government contractor that deals with nuclear reactors and engines. That means there are security risks, so they hire a lot of guards. They generally hire people who are employed in the police departments of the local city and counties. This is a no-brainer for cops because they can double their salary with less of the risk. This creates a revolving door in the police department where they lose officers as quickly as they can get them.

The elephant in the room

In winter, the City Council decided to hold a meeting on whether or not to make the City of Lynchburg a second amendment sanctuary city. This quickly became a rallying cry for pro-gun advocates and it became apparent quickly that the City Council Chambers would not be able to hold all of the people that wanted to speak on the issue. The meeting was quickly postponed and moved to EC Glass High School which was filled to the brim. The meeting started shortly after dinner and did not end until 2 AM. In the end, City Council members Wright, Nelson, Wilder, Vice Mayor Dolan, and Mayor Tweedy voted against the measure and Council members Perrow and Helgeson voted in favor of making the city a second amendment sanctuary.

In Ward one, Mary Jane Dolan faced off against Businessman Abe loper. Loper made public safety and keeping cops in the city his number one priority. Dolan ran on the anti-poverty programs and the 2020 Lynchburg Development plan. Dolan won 51.97%-47.92%. This is a decrease from 2016 where she won with 58% of the vote.

In Ward two, Sterling Wilder ran against church leader Larry Taylor Jr. Wilder ran on his constituent services and how open he is to the community. Taylor ran on restoring downtown Lynchburg. This election was marked with low turnout. Wilder ended up winning 56.40%-43.39%. This was down from 2016, where he won over 70% of the vote.

In Ward three, Jeff Helgeson ran unopposed. There were write-ins but they never stood any chance.

In Ward four, incumbent Turner Perrow decided to retire and move to Amherst County. Christopher Feraldi was nominated by the Republican Party to replace his on the ballot. Feraldi was Delegate Wendel Walker’s legislative aide in the Virginia House of Delegates and his primary focus was on economic development of the city. He ran against Army veteran and NAACP member Larry Jones. Jones focused on education and the economic development of the Fort Ave corridor. Feraldi ended up winning the election 60.97%-38.40%. Perrow was unopposed in 2016, so it is impossible to make a real comparison between elections.

What do these elections tell us about both parties?

This election tells us that the Republican Party of Lynchburg to a certain extent has woken up. Dolan and wilder faced narrower margins than in 2016. A small part of that would have to be due to the number of people that realized after the gun sanctuary vote that there was a liberal majority on the council.

This also shows the strength of the Democratic Party of Lynchburg. They Lynchburg Democrats know that running specifically as a Dem in the city that contains Liberty University would not end well. Instead, the party has given support to independents running for council positions. This has led the liberals to control the city council since the 1990s. There are cracks that are beginning to show in this. The gun control vote was 100% partisan and it is hard to play the independent when you have to make a very partisan vote. The saving grace for the party is that the city is trending slowly to the left.

What to watch for in Lynchburg’s future

I would watch the western end of the city, specifically Dolan’s district. This is where the city is swinging. If the city turns blue, it will because this area goes blue. If the city goes red, it will be because this area goes red. I would look out for the redistricting that will happen in the state senate and House of Delegates. Lynchburg is split between Mark Peake’s district and Steve Newman’s district in the Senate and is split between Kathy Byron’s and Wendel Walker’s districts in the House.

In redistricting, the city will be kept whole and there is a large bench with both parties that would be willing to make the jump. Specific names to watch would be Councilman Wright and Secretary of Transportation Shannon Valentine on the Democratic side. On the Republican side, watch Feraldi, Perrow (assuming the district contains his residence in Amherst), and Commonwealth Attorney Bethany Harrison.

Andrew Payne is a campaign organizer and freelance political consultant.